Andrew McMahon in the Wilderness Tickets

Andrew McMahon fans get ready!! With his brilliant act Andrew McMahon in the Wilderness, the indie-rock artist is back again with another stunning album, “Upside Down Flowers,” and he’s taking it on tour across North America!! Coming to the Fillmore Auditorium on Saturday 9th March 2019 – make sure you’re there!! Tickets on sale NOW – grab yours while they last!! 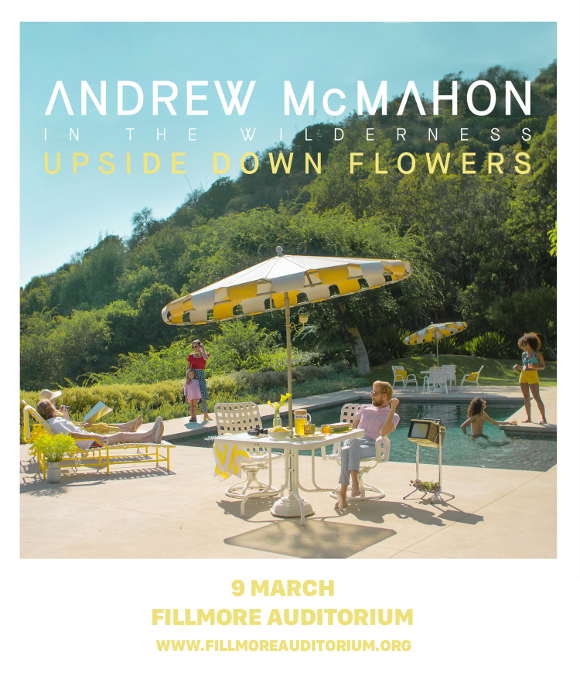 Andrew McMahon’s first solo album, “Andrew McMahon in the Wilderness,” was released in 2014 to universal acclaim from critics, and was followed up by the album “Zombies on Broadway,” released last year. Expanding sonically from the sound of his debut, this album was also a big hit with critics, and charted in the top 50 of the Billboard 200! Now, Andew McMahon is touring with his upcoming album, “Upside Down Flowers,” which, if the trend is set to follow, looks about to be his biggest and best album yet.

“Welcome to the land of Upside Down Flowers. We don’t live here because it’s easy, we live here because it’s beautiful,” he wrote of the new album. “When I close my eyes and think about these songs I see the faces of the people I wrote them for. Find what you love, be patient or be quick. There is a piece of me in this and I hope a piece of you, my friends. As I see it we are all upside down flowers. Beautiful and backwards, and if we’re lucky…just a little proud.

Are you ready to experience it all for yourself?? Get those tickets today!!