When it comes to true hip-hop, look no further than the enduring legends that are Bone-Thugs-N’-Harmony! With a legacy from the early 90s to the present day, Bone-Thugs-N’-Harmony are bringing their phenomenal live show to the Fillmore Auditorium on Friday 15th December 2017! Hip-hop fans can’t miss this opportunity to see the group that carved the sound of rap music for a generation. Tickets are on sale NOW and selling out fast – hit the “Buy Tickets,” button above to grab yours while you can!! 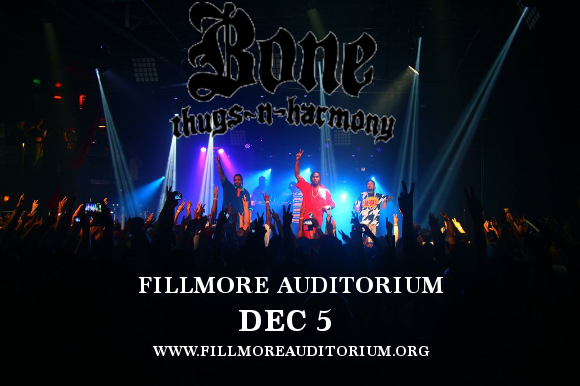 Formed of the five group members Layzie Bone, Krayzie Bone, Bizzy Bone, Flesh-n-Bone, and Wish Bone, Bone-Thugs-N’-Harmony released their first album, “Faces Of Death,” in 1993 under the name of B.O.N.E. Enterpri$e. Soon they were picked up by NWA’s Eazy-E, who persuaded them to change their name to Bone-Thugs-N’-Harmony. Signed to Ruthless Records, in 1994, the group released the “Creepin on ah Come Up”. The EP was a huge success, reaching the twelfth spot on the Billboard 200 and coming up second on Billboard’s Top R&B/Hip-Hop Albums chart!!

In the years to come, the group would go on to collaborate with artists including Phil Collins, Mariah Carey, The Game, Akon, and will.i.am. In addition, they’ve worked with other rappers and rap groups including 2Pac, The Notorious B.I.G., and Big Pun. Drake, Kendrick Lamar, and A$AP Mob!

Few groups today have a history quite like that of Bone-Thugs-N’-Harmony! Get ready to experience these living legends live – book your tickets today!