Country music chart-topper Brett Eldredge comes to Fillmore Auditorium on Friday 29th October 2021 on his Good Day Tour! Named after the most recent single from his fifth studio album Sunday Drive, the stint will see him performing tracks from the album as well as a host of other hits! Fans will also be treated to a set from special guest support act Morgan Evans!

“The Good Day tour will by far be the most appreciative and grateful experience of my career because I miss playing music so much,” Eldredge says. “I miss the human connection, the fan to fan connection, the people out there singing their hearts out who travel from all over the place to come together as a group, and be there with each other to smile, laugh and sing. The Good Day Tour is going to bring a lot of joy to people and one of those especially being me, because I cannot wait.” 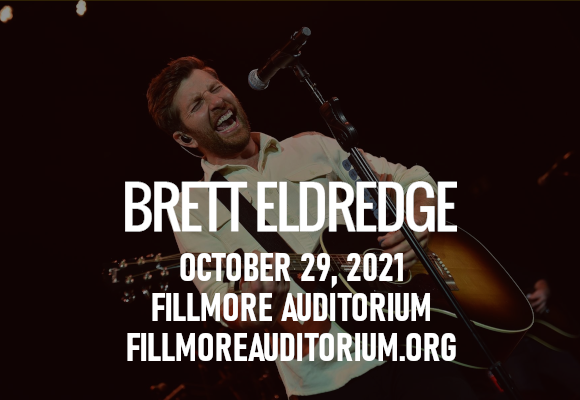 Country music singer, songwriter, and record producer Brett Eldredge signed to Atlantic Records in 2010 and hit the top-30 of the  Billboard Hot Country Songs chart with his debut single "Raymond". His debut album, Bring You Back, was released in 2013, entering the Billboard 200 at number 11 and the Top Country Albums chart at number two. Three of the album’s singles went to number one on the Billboard Country Airplay chart:  "Don't Ya", "Beat of the Music", and "Mean to Me". Eldredge has charted five number-one singles on the Country Airplay chart in total and nine of his singles have reached the top-10 of the Hot Country chart. His fifth studio album, Sunday Drive, was released in June 2020. All of his albums to date have reached the top-5 of the US Country Albums chart.