Chris Lane is set to fill 'em concerts venues in major cities as he is set to get his 'Fill Them Boots' tour on the road. This American songwriter and country music singer's star continues to rise and shine brighter as he has hit 1.2 BILLION on-demand streams for his multi-platinum singles "Fix", "I Don't Know About You", and "Big, Big Plans." Fans of Chris Lane at this neck of the woods are sitting tight for his much-awaited show at the Fillmore Auditorium on Thursday 27th January 2022. He once fronted and support several high-profile country artists' concerts before, now it's Chris Lane's time to shine on the grand live stage. Keep an eye out for those tickets that are quickly selling out, or better yet book your tickets by clicking on the 'Get Tickets' link now. 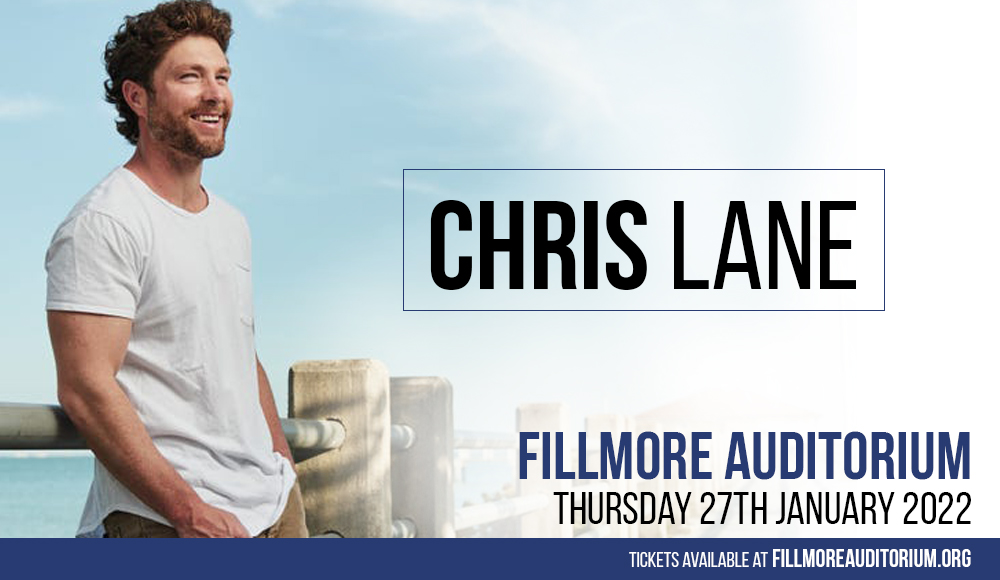 The road to country music stardom wasn't always smooth and easy for Chris Lane. While in college, his chances of having to play pro basketball hit a curb due to a sports injury. Yet this led him to pick up and learn to play the guitar. Then he encountered another roadblock as Chris and his brother auditioned for the seventh season of American Idol but failed to make it to the Hollywood stage. Determined to pursue his big, big plans and big, big dreams, Chris Lane met with Big Loud Mountain management a year later to launch his career. Initially, he fronted the Chris Lane Band instead of pursuing a solo career. Their debut album "Let's Ride" charted on the Billboard Top Country Albums chart in 2012. Chris Lane also got exposure opportunities as he opened for the likes of The Band Perry, Eli Young Band, Lee Brice, Chris Young, and Brantley Gilbert, Florida Georgia Line, and many others.

All these set the stage for Chris Lane's entry into the spotlight. Country music audience literally stopped, looked, and listen to Chris as he was voted PEOPLE's 2019 Sexiest Man Alive, and score three multi-Platinum sellers –"Fix", "I Don't Know About You", and "Big, Big Plans," plus his 2X platinum single "Take Back Home Girl" with Tori Kelly. To date, Chris Lane's songs are spinning at 1.2 BILLION on-demand streams.

Chris Lane offers more than just satisfying a country music fix. Big, big entertainment and enjoyment are in store for your whole country music-loving tribe. Get your tickets now!