A unique voice in the world of modern country music, up-and-comer Chris Stapleton is on tour this summer to promote the release of Traveller; his debut album, which has earned him four CMA Awards and four Grammy nominations! The bearded crooner heads to Fillmore Auditorium on Thursday 5th May for two nights of heartfelt lyrics, intricate harmonies and quality songs! Let yourself be transported by this whiskey-voiced troubadour! 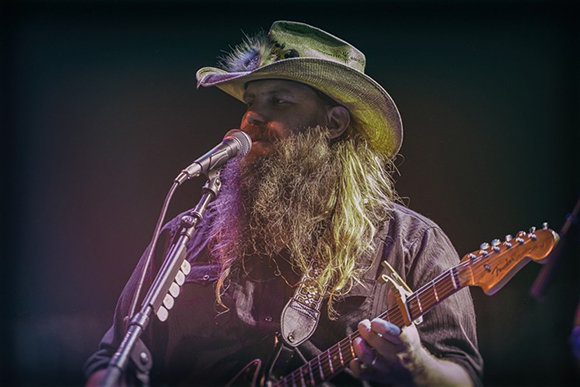 Once the leader of bluegrass band The SteelDrivers (from 2008-2010), country and bluegrass singer, songwriter and musician Chris Stapleton started his career upon moving to Nashville in 2001. Fairly soon after arriving in Nashville, Stapleton signed a publishing deal with Sea Gayle Music, working as a songwriter and moving to Warner/Chappell when he became a solo artist. He has written for artists such as artists as Adele, Luke Bryan, Tim McGraw, Brad Paisley, Darius Rucker, Kenny Chesney, George Strait and Dierks Bentley, and has had six number ones. He's also co-written with notable artists like Vince Gill, Peter Frampton and Sheryl Crow. The SteelDrivers won an International Bluegrass Music Association Award for "Emerging Artist of the Year" in 2009, and a year later were nominated for three Grammy Awards including Best Country Performance by a Duo or Group with Vocal for the songs "Blue Side of the Mountain" and "Where Rainbows Never Die", as well as Best Bluegrass Album for Reckless. After leaving the band in April 2010, Stapleton signed to Mercury Nashville, a division of Universal Music Group Nashville, as a solo artist in 2013. His debut album, Traveller, was released in May 2015 to great critical and commercial success. Stapleton won three awards at the 2015 CMA Awards: "Album of the Year", "Male Vocalist of the Year", and "New Artist of the Year", and in December 2015, Stapleton received the CMT Artist of the Year Breakout Award.