Get ready to catch Future Islands LIVE as they come to Fillmore Auditorium on Friday 29th September 2017!
These guys are one of the best alternative bands around as they really stay true to what being an 'alternative rock' band entails… their sound is loved by many all across the globe. This show is tipped to be one of the best performances of the year…. book your tickets before it's too late! 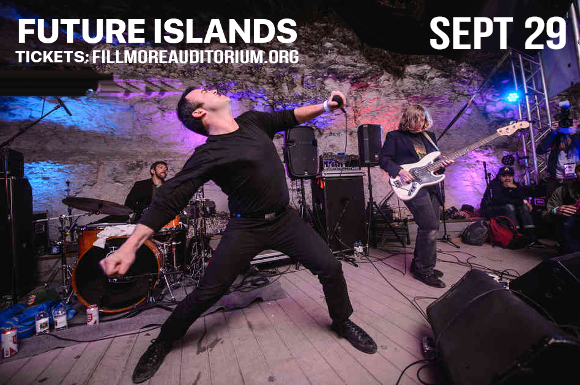 Future Islands are one of the most popular acts on the scene right now, as they set to tour to pay tribute to the success of their most recent album release 'Singles!' NME have chose their biggest single and titled the record as the best track of 2014! After sell out shows worldwide, TV appearances and endless plays on the radio… Future Islands are coming to North America to bring everything that we've all been waiting for! Their energy will captivate you and no doubt leave you wanting more!

Come and see what all the talk is about as they take to the stage at Fillmore this coming Fall…. there's only one place to be!