The dates for the much awaited Gigantour have been announced. The metal music festival is scheduled to start in January 2011 with the first show to be 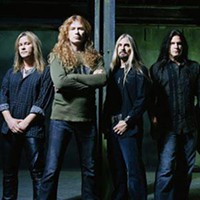 held in Camden, N.J. It must be mentioned that the last show of the tour, which is assured to be enticing one, will be held at the Fillmore auditorium co, Denver, Co on Tuesday, February 18th 2012 at 6.00 PM.

Whether you are aware of the fact or not, but Gigantour is a world famous festival founded in the year 2005, and since then, it is being held annually. Megadeth is expected to support its recently launched album, Thirteen. It must be mentioned that this album is the band’s 13th record. Needless to be mentioned, but the performance of Motorhead is also assured to spice up things.

Booking for the tickets have been started. So, please grab yours before they get sold out.