MASSIVE news, Greta Van Fleet fans – the band hailed as the new Led Zeppelin have announced that they’ve expanded their 2018 North American tour to cover even more dates and reach all those fans desperate to see the hot new rock sensation live!! It’s all happening at the Fillmore Auditorium on Saturday 29th September 2018 – don’t miss out! Hit the “Buy Tickets,” button now to get yours! 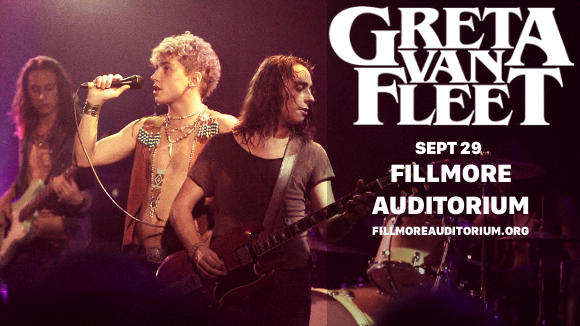 Catching the attention of the classic rock scene in 2016 with their single “Highway Tune,” Greta Van Fleet rose rapidly through the ranks of bands in their genre, capturing the hearts of millions with their gritty, raw sound.

The band released their latest EP, “From The Fires,” last year, and have confirmed in an interview that their debut full-length release is going to come out later this year. “We had all these songs we wrote three to five years ago that we were just going to put on the album. It very quickly became all new material, so I’d say about three-quarters of the songs are songs we wrote in the studio,” the band said, detailing the writing process of the new album. “It just happened very quickly, we got everything done in two weeks. We were aching to make this album.”

Fans are aching to hear it – are you one of them?? Then don’t wait about – get your tickets to see Greta Van Fleet live and sing along with all the songs you know and love with maybe a few surprises too!