Trap pioneer Gucci Mane is ready to drop his latest release, The Evil Genius, and he's headed to Fillmore Auditorium on Wednesday 28th November 2018 to bring his hot new material to the stage! Dubbed the Unusual Suspects Tour, the Atlanta-based artist will be bringing DJ Carnage and Smokepurpp along for the ride, plus some other unannounced special guests… Get ready for a serious lineup and some dope tracks from the "Wake Up In The Sky" rapper! 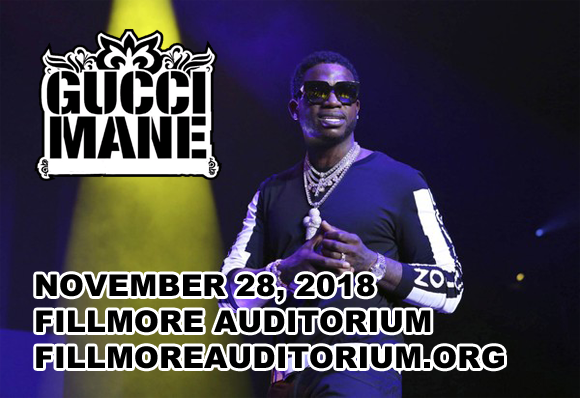 Gucci Mane is an American hip hop artist who first began his music career in 2001 when he began managing rapper Lil Buddy. His independent debut Trap House was released in 2005 and he is credited as being one of the pioneers of the trap genre. The album featured several high profile guest artists including Bun B, Killer Mike, Lil Scrappy, Jody Breeze and Khujo of Goodie Mobb. It reached the Top 20 of the Billboard R&B/Hip-Hop Albums charts and at number one on the Billboard Heatseekers Album chart. A prolific artist, Gucci Mane has released 12 studio albums and over 70 mixtapes, and he has collaborated with a variety of artists including Drake, Lil Wayne, Chris Brown, Selena Gomez, Mariah Carey and Marilyn Manson. His thirteenth studio album, The Evil Genius, is due for release in 2018.