Celebrating the 20th anniversary of their seminal album Make Yourself, Incubus are headed to Fillmore Auditorium on Saturday 14th September 2019 for the second night in a row on the Make Yourself 20th Anniversary Tour! It's hard to believe it's two decades since the alt-rock band released the double-platinum-selling record that launched their international hit singles "Pardon Me", "Stellar", and "Drive", but time marches on and this is the perfect opportunity for fans to take a moment to reminisce!

“‘Make Yourself’ was such a pivotal moment in our band, and we are beyond excited to reintroduce this album to our audience while also showcasing the many musical roads it ultimately led us down,” said lead singer Brandon Boyd in a statement. 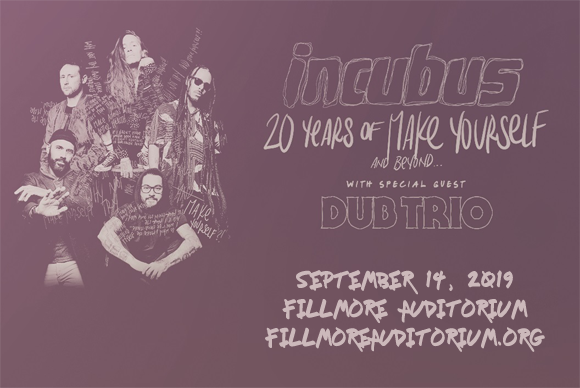 Yes, it's been 20 years since Incubus slowly but surely gained worldwide attention then adulation from the time they released their pivotal album "Make Yourself". They had a rather slow start, so to speak, up until "Make Yourself" exploded with the band's highest charting song "Drive", plus other smash hits like "Stellar", "Pardon Me", and many more. Since then, Incubus' albums and single gave them an avalanche of chart-toppers and best-sellers, as well as sold out shows and many parts of the globe. The momentum carried on with "Morning View (2001), A Crow Left of the Murder… (2004), "Light Grenades" which debuted at No. 1 in 2006, was followed by Incubus' first greatest hits album "Monuments and Melodies" in June 2009 and the band's 2011 album, "If Not Now, When?" All these gave them a whopping albums sales of over 19 million albums worldwide, and notable awards and recognitions which include Billboard's Modern Rock Single of the Year in 2001 for "Drive" a Grammy nomination for "Best Engineered Album (Non-Classical)" for the album Morning View.

And with that, Incubus calls on their fans and extends this invitation: “We are so looking forward to this Fall tour. Make Yourself was such a pivotal moment in our band and we are beyond excited to reintroduce this album to our audience while also showcasing the many musical roads it ultimately led us down. See you soon!” So now what, are you in?