Three 6 Mafia founder, Katy Perry collaborator, Oscar winner, rapper, songwriter, record producer and hiphop superstar Juicy J is coming to Fillmore Auditorium on Saturday 30th May! Taking his show on the road this summer with his The Hustle Continues Tour, Juicy J is pumping audiences up ready for the launch of his fourth studio album, which is slated for release this June! 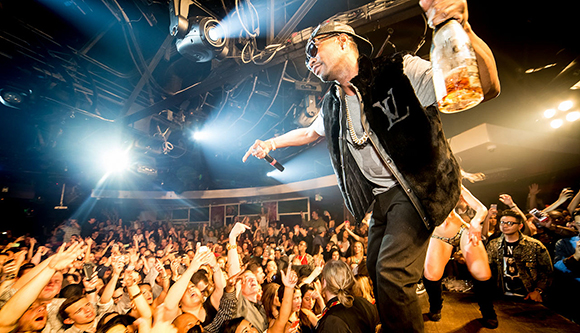 Juicy J (Jordan Michael Huston) is an American rapper, songwriter and record producer and founding member of Southern hiphop group Three 6 Mafia. His debut solo album, Chronicles of the Juice Man was released in 2002 under North North Records, in between Three 6 Mafia releases. Juicy J, alongside fellow Three 6 Mafia members DJ Paul and Frayser Boy, wrote the 2005 song "It's Hard Out Here for a Pimp" from the 2005 film Hustle and Flow, winning Best Original Song at the 78th Academy Awards. 2009 through 2011 saw Juicy J moving away from Three 6 Mafia in order to focus on his solo career. During this time he frequently collaborated with fellow rapper Wiz Khalifa, appearing on his mixtapes and releasing some of his own including Blue Dream & Lean. In September 2012, Juicy J secured a recording contract with Columbia Records and Dr. Luke's Kemosabe Records, and in 2013 he released his third album Stay Trippy, featuring guest appearances on the album including Wiz Khalifa, The Weeknd, Lil Wayne, Nicki Minaj, Chris Brown. His fourth album Pure THC: The Hustle Continues, is slated for release in summer of this year.