Catch the exciting performance from the mind blowing Kaytranada as he drops his electronic beats LIVE as he comes to Fillmore Auditorium on Thursday 6th May 2021! With his impressive releases, Kaytranada has plenty of music to delve into before his 2021 Spring dates, including his latest release of Bubba in 2019 – get prepared and book your tickets to be part of the crowd! 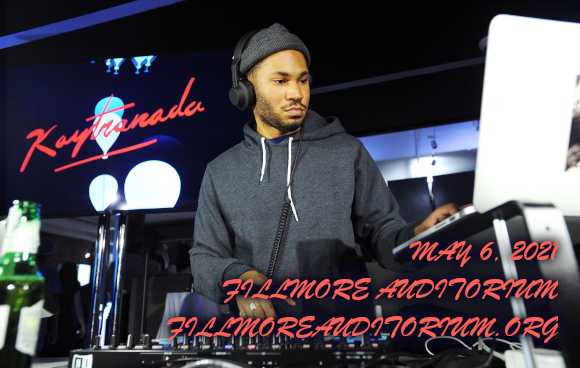 The Canadian artist Kaytranada has been showcasing his music since 2010 as he kick started his career Kaytradamus before developing it into the name we know today in 2012. With his incredible projects he has dropped countless of tracks, including an impressive forty one remixes to date! With his career taking itself to the next level, Kaytranada has become an international name, hitting the road across Canada, America, Europe, Australia and more in his previous dates which have reached over fifty countries around the world!

Kaytranada kick started his musical journey back in 2014 as he made his first sign to a record label and was able to release his first ever studio album to the world! 2016 was a big turning point for him and his music as 99.9% topped the charts and enabled him to collaborate with some of the biggest names right now in Hiphop and R&B; Anderson Paak, GoldLink, AlunaGeorge and more these artists were featured on the record and grabbed the attention from not only his own fan base but all of their individual fan bases as well.
For the record, Kaytranada also grabbed the spotlight for awards and received positive feedback from the press. His album won the 2016 Polaris Music Prize and received an amazing and impressive score from Pitchfork – straight away Kaytranada was placed at the top of the list for the must-watch, must-listen to artists of the entire year!

With so much hype surrounding his first album, Kaytranada continued to work on music and with his backing of sold out concerts and high ratings behind him, Kaytranada gave to the world his second release of Bubba just last year. The album topped his rating from Pitchfork from his previous release and he has since been snapped up by Independent label HW&W Recordings to push his career further into the limelight!

2020 brings Kaytranada back on the road this time he will be showcasing his DJ skills across North America and giving a selection of tracks from his latest Bubba release! Get ready to experience it all for yourself – believe the hype & grab your tickets today!