Christian hip hop artists, frequent collaborators and good buddies LeCrae & Andy Mineo are bringing their joint Better Late Than Never Fall tour to Fillmore Auditorium on Sunday 23rd September 2018! The tour announcement come just after the announcement of another collaborative single, "Didn't I", and if that's anything to go by, it gives fans a good idea of just how dope this tour will be! Book your tickets now to see these two red hot rappers live! 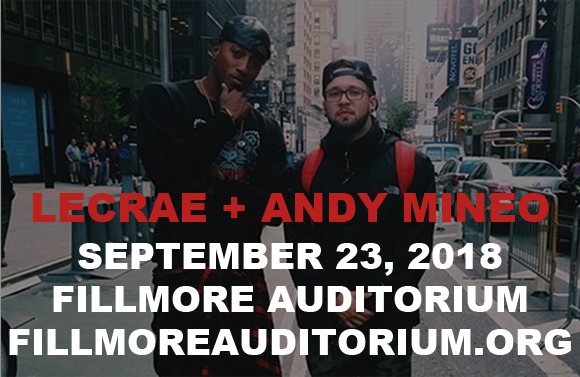 American Christian hip hop recording artist, songwriter, record producer, and actor LeCrae began his career in 2004 with the release of his debut album Real Talk. The album was released on the independent record label Reach Records, of which he is the president, co-owner and co-founder. Real Talk enjoyed moderate success, reaching number 29 on the Billboard Gospel Albums chart, but it was his third studio album, Rebel (2008), that brought him to a wider audience, becoming the first Christian hip hop album to reach number one on the Billboard Gospel chart. LeCrae's sixth studio album, Gravity (2012), pushed him to even further heights, debuting as the best-selling album overall in the iTunes Store, launching at number three on the Billboard 200 and winning the Grammy Award for Best Gospel Album at the 2013 Grammy Awards, marking the first time that a hip hop artist received this award. His following album, Anomaly (2014), debuted at number one on the Billboard 200 and was the first album to top both the Billboard 200 and the Gospel chart simultaneously. His most recent release is Let the Trap Say Amen (2018) – a collaborative album with producer Zaytoven.