Could you possibly have an incredibly funky experience while helping out someone? Yes, Brooklyn-based band Lettuce will be having a benefit concert for Conscious Alliance. With a 20-year history of old school funk stardom, Lettuce has honed their ability to offer the most energetic live shows! On December 13, 2013 they are set to make another mind-blowing tour at the Fillmore Auditorium in Denver, Colorado at 7:30 PM. Kyle Hollingsworth Band will also be there to prime everyone for the show. 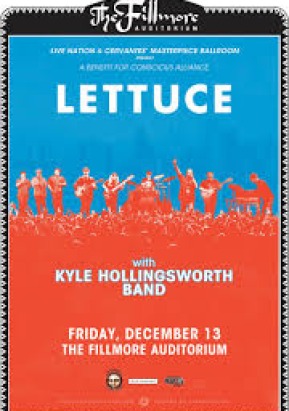 Lettuce’s arsenal of hard funk blended with smooth soul sets them apart from thousands of other funk bands. The members are guitarists Eric Krasno of Soulive and Adam “Shmeeans” Smirrnoff, keyboardist Neal Evans, journeyman drummer Adam Deitch, bassist Eick “E.D Coomes, Sam Kininger  and Ryan Zoidis on sax, vocalist Nigel Hall and partial member Rawshawn Ross on trumpet. Their music is famously regarded for its far-out melody and intensely groovy rhythms that can induce non-stop dancing. Their latest album “Fly” was released in 2012 which has received quite a lot of accolades from funk lovers.

Kyle Hollingsworth is known as a remarkable music artist. His impressive ability to play instruments, compose and perform in a variety of style established himself as respected talent in the industry. He is now a member of the acclaimed jam masters The String Cheese Incident.

If you fancy the idea of dancing through a mosaic of insane music and you love a night hard-core fun, you better get your tickets now!