The Gen-Z rapper you gotta love, Lil Tecca, is back and ready to be spitting bars live on stage as he makes a stop at the Fillmore Auditorium on Saturday, 5th March 2022 for his Tecca Loves You Tour. The American rapper, singer, songwriter, and producer widely known for his breakout hit, "Ransom", recently dropped his second album "We Love You Tecca 2" hitting #10 in the US charts. He's got melodic raps and solid hooks that take you on a lit ride. Vibe and jam to new music and fan-favorite hits such as "Did It Again", "Somebody", "Dolly", "Never Left", "Ransom", and many more. In it for a lit night? Book your tickets now! 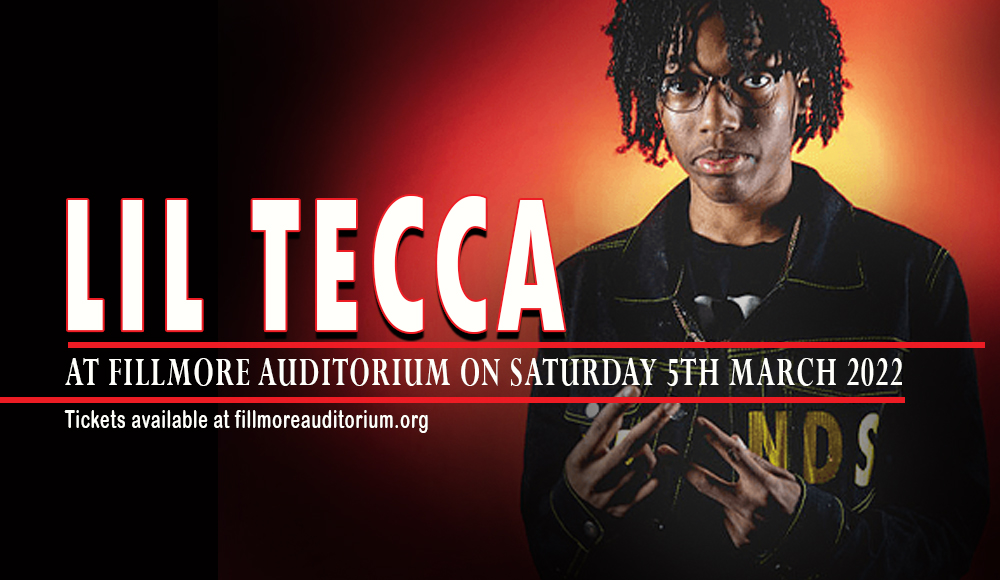 Tyler Sharpe, who professionally goes by the name Lil Tecca, has his roots born in Queens, New York with his Jamaican immigrant parents. He found his interest in rapping and spitting bars through freestyle diss tracks with friends while they played Xbox. He first dreamed of becoming an NBA player before taking a serious interest in making music.

His first track that gained attention was "Tectri" with his friend, Lil Gummybear, in 2017 as they collaborated and dropped tracks online. After building an audience in 2017 through 2018, he soared with his multi-platinum breakout hit single, "Ransom" that gained tens of millions of streams within weeks after it first dropped, peaking at #4 on the Billboard Hot 100. His debut mixtape, "We Love You Tecca" also hit #4 on the Hot 200 charts. By 2020, he released his debut album, "Virgo World", which hit #10 on the Billboard 200 with the tracks "Dolly" and "When You Down" making an appearance in the Hot 100.

2021 marks a new chapter for the man you gotta love for his catchy rhymes and alluring hooks. Lil Tecca's on a brand new journey with his new album, "We Love You Tecca 2", which also hit #10 in the charts featuring tracks such as "Repeat It" and "Never Left". HipHopDx acclaimed Tecca's "infectious jubilance", and REVOLT says the album "has more hits than a great number of artists twice his age".

Gaining millions of streams and multi-platinum certifications, he's one of rap's most pressing rising stars. Solid hooks, rich melodies, and catchy rhymes to vibe and jam to. Lil Tecca's got tunes, beats, and bars we just gotta love. You're surely in it for a lit night. Book your tickets now!