Lotus' virtual winter tour was a great way of connecting with their fans through the lockdown. But nothing beats the real thing. Finally, Lotus has announced official dates for a real tour that would take them to different concert venues –to play in the flesh before a live audience. One of their most exciting stops would be at the Fillmore Auditorium on Sunday 31st October 2021. Feed this hyper improv band with lots of fan energy to drive Lotus to jam the night away. Tickets are on sale now! Click the 'Get Tickets' link to save that spot. Book your tickets now! 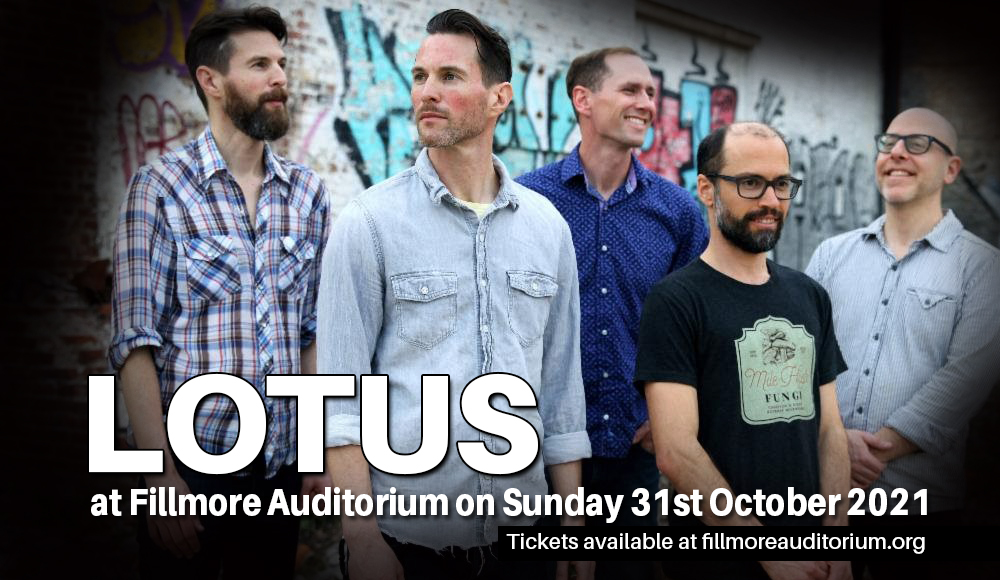 In 1999, a college group of friends from Indiana, namely Mike Rempel (guitar), Jesse Miller (bass), Luke Miller (guitar or keyboard), Mike Greenfield (drums), and Chuck Morris (percussion), got together, made music that is loosely described as jam / electronic / livetronica.

Jesse Miller said of the band's sound: "I truly believe Lotus' sound comes from the roots of rock 'n' roll mixed with electronic beats that are popular today. It took a long time for us to finally find a sound we all agreed on. But believe me, we experimented plenty before deciding what sound we were looking for"

Experimentation with elements of rock, electronica, jazz, jam, hip-hop, funk, dubstep made them prolific recording artists– having released 14 studio albums to date. And it is also experimentation that drives them to be spontaneous and engaging in their live shows. They do something a little different each time that no shows run exactly the same. More often, the energy of the crowd takes over, and the band gets into hypnotic riffs, eclectic, gripping, and overextended jams. Lotus' shows are not only a feast for the ears. Their mind-blowing and ethereal light shows complement the sonic experience.

Experience the penultimate jam session with Lotus. Tickets out now!