Hold onto your hats One Direction fans! Louis Tomlinson comes to Fillmore Auditorium on Monday 28th February 2022 on his eagerly awaited debut headlining world tour! The singer has proved himself to be a capable songwriter over the years, putting his pen to 38 One Direction tracks, including six of their hit singles, so fans can look forward to some exciting new tracks from his upcoming debut album Walls! Keep your eyes peeled as his special guest support act is soon to be announced! 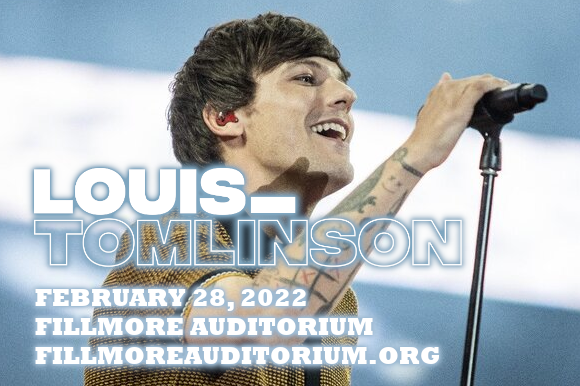 In 2010, British singer and songwriter Louis Tomlinson first came to public attention when he auditioned for the British music competition series The X Factor. Tomlinson was put together with four other solo contestants to form the boy band One Direction, who subsequently signed to SyCo, Simon Cowell's label, in 2011. The pop band, who released five studio albums togther before disbanding in 2017, were the first band in the U.S. Billboard 200 history to have their first four albums debut at number one and won nearly 200 awards as a group. Since leaving the band, Tomlinson has proven himself as a capable solo artist, releasing his debut solo single, "Just Hold On" (with Steve Aoki), in 2016, peaking at number 2 on the UK Singles Chart and reaching number one on the Billboard Dance/Electronic Digital Song Sales chart. Walls, his debut solo album, was released in 2020.