Linkin Park vocalist and co-founder Mike Shinoda comes to Fillmore Auditorium on Friday 9th November 2018 for the second of a two-night-run! Shinoda will bring a powerful and vulnerable show to the stage as he performs from his recent album Post-Traumatic, which deals with his emotions following the 2017 death of his best friend and band-mate Chester Bennington. Tickets available now! 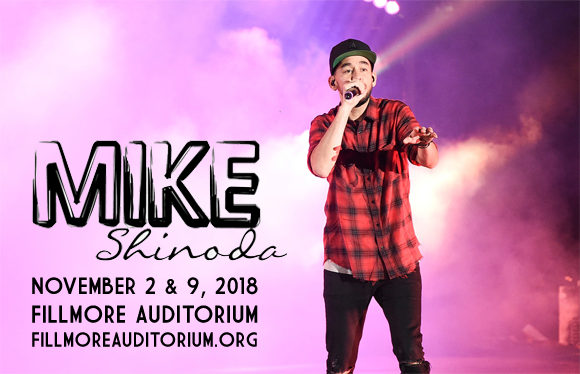 American musician, singer, songwriter, rapper, record producer and graphic designer Mike Shinoda is best known as co-founder of alternative metal band Linkin Park. Rhythm guitarist, primary songwriter, keyboardist, producer, and vocalist of the band, Shinoda formed the group in 1996, and the band subsequently became one of the world's best-selling artists, having sold more than 70 million albums worldwide. In January 2018, Shinoda released the Post-Traumatic EP in the wake of his bandmate, and lead singer of Linkin Park, Chester Bennington's death on July 20, 2017. Shinoda released his debut solo album of the same name in June 2018.