The master of sick bars and trap beats is back for a tour in support of his newest #1 "Demons Protected by Angels". Gearing up to throw sleepless nights of live hip-hop music, NAV is set to serve his biggest hits and new material live on stage. The A-list collaborator known for his hypnotic beats and striking bars in his hit singles "Tap", "Champion", and "Myself", will be hitting the stage at Filmore Auditorium on Thursday, 9th of March 2023. Make sure you don't miss out on the 23-date trek of his sick hits and new music live on tour by booking those tickets now! 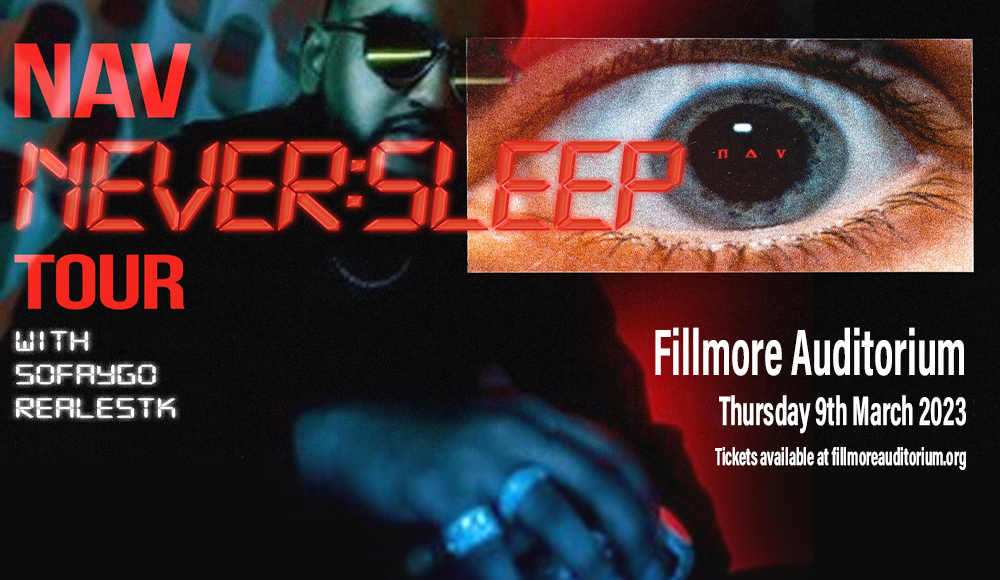 NAV just released his fourth studio album "Demons Protected by Angels" last September of 2022. The record marks his third consecutive #1 on the Billboard Top R&B/Hip-Hop albums chart. It also made it to #2 on the Billboard 200. The album features his new singles "Never Sleep" with Lil Baby featuring Travis Scott, "Wrong Decisions", and "One Time" with Don Toliver featuring Future.

"Demons Protected by Angels" follows his 2020 album "Good Intentions" which is his second album to hit #1 on the Billboard 200. Praised by listeners and critics alike, the album featured his hit single "Turks" with Gunna featuring Travis Scott.

In support of his newest #1, Travis Scott is taking his new record to the live stage, along with his biggest hits, as he gears up to deliver explosive live performances at the Never Sleep '23 Tour. The 23-date trek will take place in various cities across North America which concludes in his hometown, Toronto.

From uploading his early songs to SoundCloud in 2015, amassing millions of listens, and his track "Myself" gained widespread attention including from Kylie Jenner herself, NAV's career has always been well-supported and well-received by the industry. Featuring in Travis Scott's track "Biebs in the Trap" in 2017, NAV followed through with public attention as he released the lead single "Some Way" featuring The Weeknd off of his debut mixtape. The song was awarded Platinum by the RIAA.

As NAV gears up for sleepless nights of his striking and sick bars and trap beats, make sure you don't miss out on the Never Sleep '23 Tour by booking your tickets now!