Punk’s not dead!  And yes, NOFX are still out there, at large, still spreading music and mayhem all over the country. Catch them while you can on their one-night only performance here at the Fillmore Auditorium on the 12th of December.  Gates will swing wide open starting at 6:00 pm. 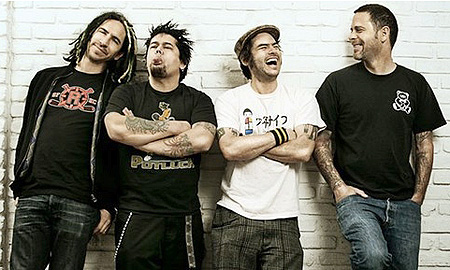 Punk music traces its roots back in the 80s, and has now morphed into all sounds and noises…and yet, it still sounds pretty damn good, right?  One of the punk pioneers and was responsible for the rebellious flame that still burns to this day is NOFX.  They banded together 1983, founded by vocalist/bassist Fat Mike and guitarist Eric Melvin. Drummer Erik Sandin joined NOFX shortly after. In 1991, El Hefejoined to play lead guitar and trumpet, rounding out the current line-up.

NOFX is the antithesis of most mainstream rock superstars around.  They haven’t been signed to any record label.  They grant and consent only to very few select interviews.  They only have a handful of music videos. They refused airplay of their music videos on MTV, VH1, and other video shows. They have songs that range to as short as 32 seconds, to as long as 18 minutes.  They poke friendly-fun at fellow punk acts like The Offspring.  They seem to have defied every rule in the music marketing rule book; yet their accomplishments could be the envy of aspiring indie bands.  NOFX has released twelve studio albums, fifteen extended plays and a number of seven-inch singles; and has sold over 6 million records worldwide.

If you want pure, unadulterated, hardcore, the real-deal punk, you’ve come to the right place.  NOFX will serve it to you with no frills, no chills, yet high on thrills!  Go ahead punk, make your day by scoring yourself tickets — now!