Backed by a ten-piece band, the incredible and inimitable P.J. Harvey comes to Fillmore Auditorium on Tuesday 2nd May 2017 as part of her Spring 2017 Tour! Her biggest stint in over ten years, Harvey is hitting the road to promote her Grammy Award-nominated album The Hope Six Demolition Project! Don't miss your chance to see this alt-rock queen live! 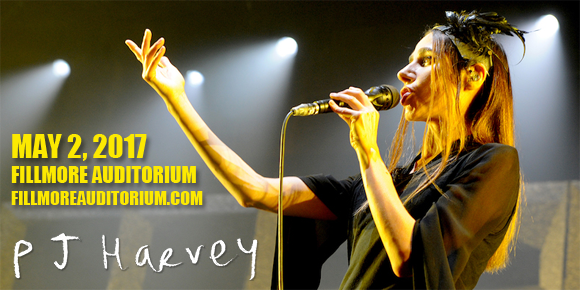 PJ Harvey is an English singer, songwriter, multi-instrumentalist, writer, poet, and composer, whose musical career began in 1988 when she became the vocalist, guitarist, and saxophone player for a local band called Automatic Dlamini. Three years later, she formed a trio with other members of this band under the name PJ Harvey. The trio disbanded after releasing two studio albums, Dry (1992) and Rid of Me (1993), and Harvey went on to release a further nine studio albums as a solo artist. PJ Harvey is the only artist to have been awarded the Mercury Prize twice, (for Stories from the City, Stories from the Sea (2000) and Let England Shake (2011)), and she has also received eight Brit Award nominations, seven Grammy Award nominations and two further Mercury Prize nominations. In 1992, she was awarded Best New Artist and Best Singer Songwriter by Rolling Stone, as well as Artist of the Year in 1995, and listed Rid of Me, To Bring You My Love (1995) and Stories from the City, Stories from the Sea on its 500 Greatest Albums of All Time list. Harvey was awarded for Outstanding Contribution To Music at the NME Awards in 2011, and in June 2013, she was awarded an MBE for services to music.