Santigold celebrates the 10th anniversary of her self-titled debut album this year, and she's bringing the party to Fillmore Auditorium on Tuesday 30th April 2019 on her Ten Years Golder Tour! The tour kicks off at Fillmore, so expect a larger-than-life show from this exuberant, genre-defying artist! With her infectious energy and utterly unique tunes, Santigold is a must-see act! 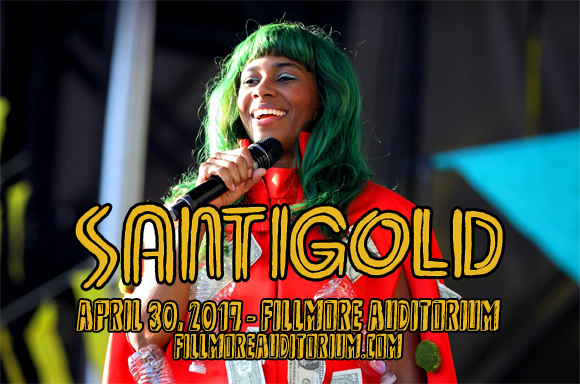 American singer, songwriter and record producer Santigold (known as Santogold until 2009) first came to public attention in 2007 with the release of her critically acclaimed first two solo singles "Creator" and "L.E.S. Artistes". The tracks preceded her debut album, Santogold (2008), which was named "a visionary album" and "one of the year's most unique debuts" by Rolling Stone. In promotion of the album, she supported Björk, M.I.A., Kanye West, Jay-Z, The Streets, Coldplay and the Beastie Boys. To date, she has released four studio albums, the most recent being 2018's dancehall-influenced I Don't Want: The Gold Fire Sessions, which reached number 1 on the U.S. Reggae Albums Chart.