Prog-rock band Seether are unpacking their guitars and plugging-in to a livewire concert performance here in Denver, Colorado.  Yes, they’re set to unleash a thunderous rockfest with Sick Puppies and Kyng in what is dubbed as the Triple Threat tour, happening here at the Filmore Auditorium on the 13th of October 2012, Saturday, starting at 6:00 pm. 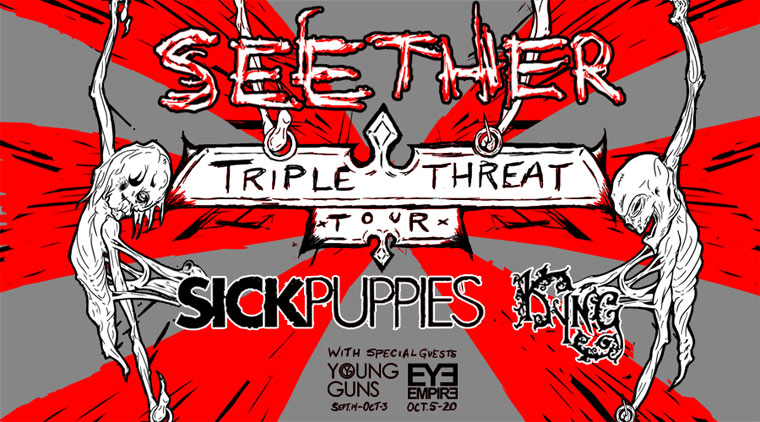 All the way from Pretoria, South Africa, Seether’s music seeped its way to the US charts that burst into a sound surge, affecting rock afficionados worldwide.  Formed in 1999, they broke into the post-grunge scene in 2002 with the release of their major label debut single “Broken”, a duet with Evanescence’s lead singer Amy Lee. This breakthrough single, along with a newly recorded track entitled “Sold Me” was featured in the movie soundtrack of “The Punisher”. The band toured heavily as a supporting act for Evanescence, and they started to amass their own following.  From thereon, Seether continued to release albums that solidified their lasting presence in the rock arena.

Seether is now back on the road, dubbed as The Triple Threat tour,   in support of their latest release, Holding Onto Strings Better Left to Fray, which debuted at #2 on Billboard Top 200. The album has sold over 300,000 copies to date.  Sharing the bill on this tour are Sick Puppies and Kyng.

If you’re a big Seether fan, then this is a life and death situation. There is imminent threat that tickets will be selling out fast. What are you waiting for, book your seats now!