Recognized all across the world as one of the finest alternative rock bands, “Snow Patrol” will be giving an enthralling performance for the audience on Friday, April 27, 2012 7:00 PM at Fillmore Auditorium, Colorado. 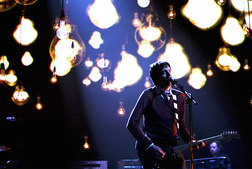 Snow Patrol was formed in the year 1994 at the Univeristy of Dundee as an indie rock band and is currently based in London. The primary three records of the band – “EP Starfighter Pilot”, “Songs for Polarbears” and “When it’s all over we still have to clear up”, did not achieve immense success but its record – “Final Straw” got the band the much awaited fame.  “Final Straw” sold more than three million copies worldwide, and was even certified as 5X platinum in UK. The next album – “Eyes Open”, released in 2006 also topped the album charts selling more than 6 million copies worldwide. The band has recently launched their sixth studio album – “Fallen empires” and are preparing for a tour of Ireland and UK in 2012.

The most significant feature about Snow Patrol is that even after 18 years, the band is still glorious, flying and unpredictable. The evening is definitely going to be captivating, and you are going to enjoy every minute of it. So, hurry up, and secure your seats right away.