A compelling audio insanity and a thunderous musical madness will happen in Denver, Colorado on February 17, 2013.  Stone Sour and Papa Roach will fuse together to spark off the audiences in Fillmore Auditorium . Get hooked! Dance outrageously! Groove and scream with these stupefying bands! 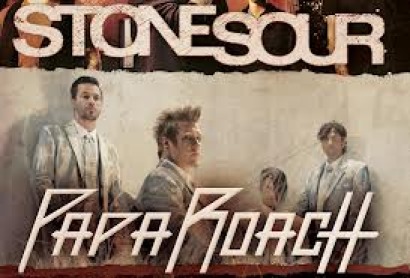 Identified as a band that provides reflective music, Stone Sour gives listeners a shiver of alternative metal, hard rock, post-grunge and heavy metal mayhem. The group consists of a great line up of versatile musicians, Corey Taylor (lead vocals, piano, guitar), Jim Root (guitar, keyboard), Josh Rand (guitar) and Roy Mayorga (drums, percussion). They have released four studio albums and a digital live album. Their self-titled debut album charted at number 46 on Billboard 200, and attained an RIAA Gold certification. This album earned the band two Grammy Award nominations for Best Metal Performance for their singles “Get Inside” (2003,) “Inhale” (2004).  In 2006, they were once again nominated for Best Metal Performance by Grammy Award for their single “30/30 – 150” from their second album titled “Come What (ever) May”. In every song of Stone Sour, you can lucidly hear their emotions, and feel their poignant and powerful music.

Moreover, Papa Roach band will also give y’all a forceful hard rock punch you can get addicted to. You’ll surely be obsessed with this perfect team up of incredibly talented individuals: Jacoby Shaddix (lead vocals), Jerry Horton (lead guitar, backing vocals), Tobin Esperance (bass guitar, backing vocals) and Tony Palermo (drums, percussion). The band’s first major-label debut “Infest” was triple-platinum. Their success carry on as they released  more hit albums and sold over 18 million copies worldwide. On October 2012, “The Connection” lucratively came out as their latest album. “Forever”, “She Loves Me Not”, “Last Resort”, “Scars”, “…To Be Loved” and “Getting Away With Murder” are among their most prominent songs.

It would be the wisest decision to buy your tickets now! This is gonne be crazy, fierce, fun and exhilirating so don’t miss this out!