Ring in the New Year with an incredibly special show, as psychedelic indie-rock heroes STS9 – Sound Tribe Sector 9 head to Fillmore Auditorium on Saturday 31st December 2016 for an unforgettable night of improvisational music, amazing light displays and holiday cheer! Do something different this year, and start 2017 as you mean to go on – with a damn good groove! 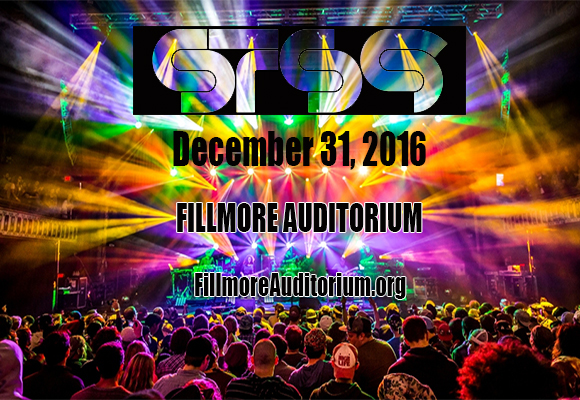 Instrumental electronic rock band Sound Tribe Sector 9 (aka STS9), formed in Atlanta, Georgia fifteen years ago, and has since experienced a dazzling and rapid ascent to the cutting edge of the international music scene. Categorizing themselves as "post-rock dance music," the band fuses typical live rock instrumentation with electronics, and champions collaborative groove over solo virtuosity. Over the years, STS9 has released 11 studio albums, two remix albums, and multiple live DVDs on their homegrown label 1320 Records. Touring extensively, both nationally in the US and internationally, they rank among Pollstar Magazine’s list of top-grossing touring acts, with a heavy presence in the music festival circuit. STS9 boasts a commendable list of opening acts such as Snoop Dogg, NAS, Bassnectar, Ghostland Observatory, The Glitch Mob, Thievery Corporation, Pretty Lights, Big Boi (Outkast) and numerous others. Their most recent EP, When The Dust Settles, debuted at #1 on the iTunes Electronic Charts and in Billboard’s Top 25, while the first single “Scheme” was downloaded over 100,000 times in its first week alone.