Underground horror rap duo Suicideboys are bringing their Pre-World War III Tour to Fillmore Auditorium on Wednesday 12th September 2018! The duo, who have released a number of tracks recently, are working on their upcoming album, so fans can get excited to hear even more exclusive material from the pair! Tickets on sale now! 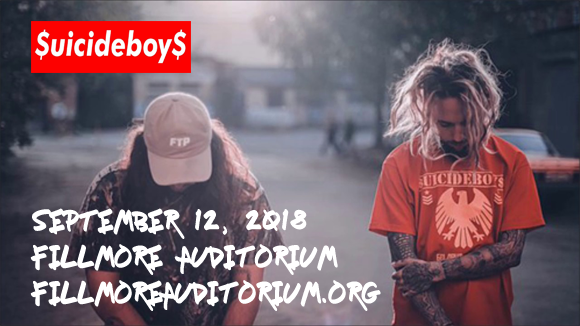 SuicideBoys are a New Orleans-based hip hop duo consisting of cousins Ruby da Cherry (aka Suicide Leopard) and Slick Sloth (aka Suicide Christ). A culmination of the different musical styles of the two performers – Ruby is influenced by punk rock, Slick was a DJ and songwriter – SuicideBoys make dark, atmospheric glitch-trap. Since their formation in 2014, the duo has released a prolific collection of tracks, including the Kill Your$elf saga.