Unparalleled energy. Amazing showmanship. Charismatic stage presence. Positive vibe. Meaningful lyrics. When Switchfoot hits the stage, they have their way of switching on the audience's adrenaline. Everyone is in high spirits; and everyone is guaranteed for a good time! Switchtfootband's members are Jon Foreman (lead vocals, guitar), Tim Foreman (bass guitar, backing vocals), Chad Butler (drums, percussion), Jerome Fontamillas (guitar, keyboards, backing vocals), and Drew Shirley (guitar, backing vocals). has been tagged as a Christian rock band. But due to the universal appeal of their songs, Switchfoot has moved beyond labels and got the credit and appreciation from mainstream rock audience. Now here's your chance to experience that adrenaline rush as Switchfoot & Tyson Motsenbocker hit the Fillmore Auditorium stage on Saturday 30th March 2019. As one of the pillars of the alternative rock scene, Switchfoot has legions of fans all over who will not rest until they score tickets to the show. Now get on your toes, and dare to move to get tickets before they run out. Yes, all you need is a ticket to get access and witness a full-blown alternative rock concert from one of the most recognizable rock acts in history. 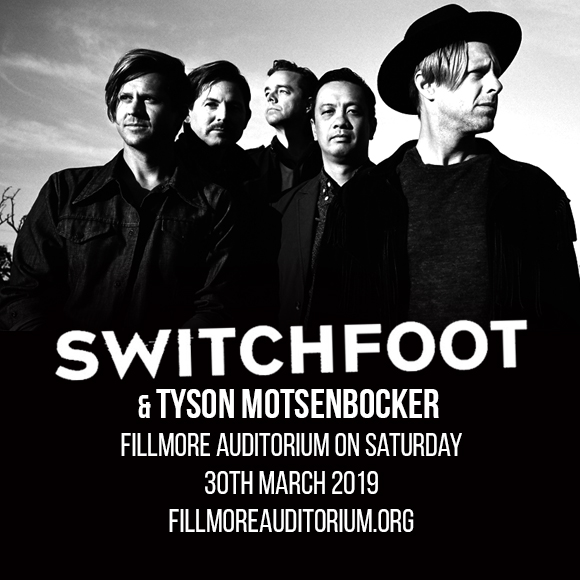 Switchfoot had its humble beginnings in San Diego, California in the year 1996. Composed of band's members –Jon Foreman (lead vocals, guitar), Tim Foreman (bass guitar, backing vocals), Chad Butler (drums, percussion), Jerome Fontamillas (guitar, keyboards, backing vocals), and Drew Shirley (guitar, backing vocals), Switchfoot was heavily supported by Christian rock radio stations. Yet their alternative rock guitar driven sound was just too good to be ignored. Slowly but surely, other stations caught on and started playing their songs, which reached a wider mainstream rock audience. They were tested on mainstream waters, so to speak, when four Switchfoot tracks (including the hits: “Dare You to Move” and “Learning to Breathe”) were included heavily highlighted in the blockbuster 2002 movie "A Walk to Remember". In addition, Mandy Moore's cover of Switchfoot's "Only Hope" in one of the movie's most important scenes, truly created an imprint of the band's inspirational ingenuity. They passed the test with flying colors and was instantly signed by a major label and released their first major label album “The Beautiful Letdown” in 2003, which resulted in sales of over 2.6 million copies and achieving double platinum status. The 'Christian band' tag did not alienate fans from appreciating the unique energy and positivity of their music. In a 2003 interview with Rolling Stone, frontman Jon Foreman had this to say about their categorization: “We’re Christian by faith, not genre”. Their credibility as a major rock music force was further solidified by a Grammy Award in 2011 for the album “Hello Hurricane” as Best Rock or Gospel Album, three ASCAP awards and 11 GMA Dove Awards.

Over the years, Switchfoot has built as solid fanbase — passionate about their music and raring to catch their boundless energy and charismatic stage presence. Once again, Switchfoot is at their feet and on the road again for a tour highlighting their latest album 'Native Tongue'. Joining them to open up the show is singer, songwriter, guitarist Tyson Motsenbocker. Give yourself the chance to catch Switchfoot live; a truly rewarding show meant to be experienced and bring great memories in this lifetime.