Have you ever wondered what it feels like to be part of an EDM party over at Battestar Galactica or at the Starship Enterprise? Take this fantastic voyage as The DoLaB Presents The Polish Ambassador, Liminus, Random Rab, Mr. Lif & Ayla Nereo. Get your tickets now and don't miss the rave-meets-sci-fic party at the Fillmore Auditorium on Saturday 18th October 2014. 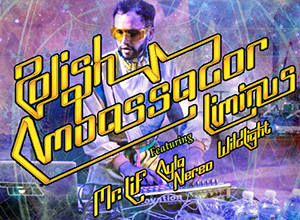 The DoLaB is known for its "interactive environments, event production and creative lighting design all in service of its highest mission: creating experience as art form." In other wordss, they're the experts who bring in the element of wonderment to parties and events. These guys know that music is quintessential to complete the 'awesome' party equation. Hence, The DoLab Presents, is an event that is known for presenting a jaw-dropping audio-visual synergy experience.

The DoLaB Presents… is headlined by The Polish Ambassador a.k.a. David Sugalski, a multi-genre musician, producer, electronic DJ. The Ambassadorks or 'The Family' are Sugalski's loyal fans who are starting to grow by the number in leaps and bounds. His 'side-kick' of sorts is Liminus. Together, they create sonic landscapes where electronic music fans frolic in mind-blowing grooves and in a kaleidoscope-like party experience.

Are you ready to join an EDM odyssey? Your mission is to dance and party beyond space and time. The countdown begins now…Buy a ticket and don't be left behind!