Genre-bending electronic mavericks Thievery Corporation are headed to Fillmore Auditorium on Friday 10th December 2021 on The Outernational Tour, bringing euphoric beats to the masses! Known for their eclectic albums that have featured collaborations with a range of incredible artists, Thievery Corporation have cultivated an incredible career over the past 25 years. Now's your chance to see this talented duo do their thing live! 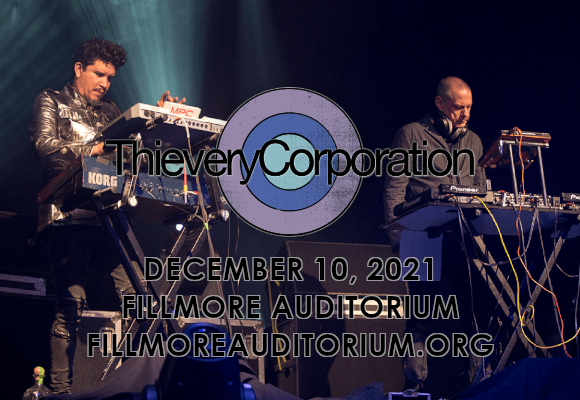 Formed by Rob Garza and Eric Hilton in 1995, Thievery Corporation is an electronic music duo that fuses several musical genres, including  dub, acid jazz, reggae, Indian classical, Middle Eastern music, hip hop, electronica, and Brazilian music. The twosome released their debut album, Sounds from the Thievery Hi-Fi, in 1996 and reached number 12 on the Billboard Top Dance/Electronic Albums Chart. Seven of their 10 studio albums have reached the Top 10 of the chart, with six of them reaching the Top Five and two albums reaching number one – The Cosmic Game (2005) and Radio Retaliation (2008). They have collaborated with several popular artists over the years, including Emiliana Torrini, The Flaming Lips’ Wayne Coyne, Jane’s Addiction’s Perry Farrell, David Byrne, Anoushka Shankar, Femi Kuti, and Seu Jorge. Thievery Corporation’s most recent album is 2020’s Symphonik.