Grammy-nominated rapper 21 Savage comes to Fillmore Auditorium on Saturday 27th July 2019 on the I Am > I Was Tour! The Atlanta-based hip hop artist is hitting the road in promotion of his latest star-studded album that features the platinum single “a lot” with J. Cole, building the hype and proving that his live shows are fire! Joining him on the trek is red hot up-and-comer DaBaby! 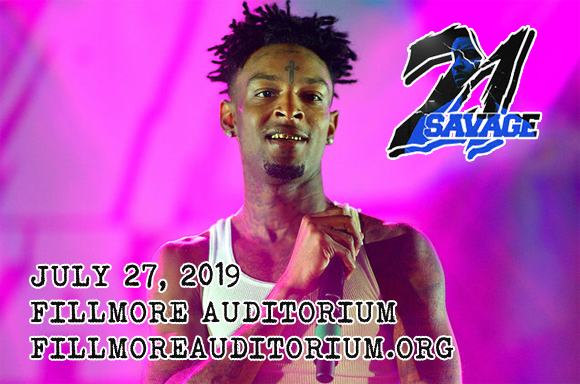 Rapper, songwriter and record producer 21 Savage began rapping in 2013 and made waves in the Atlanta hip hop community two years later with his debut mixtape, The Slaughter Tape. The following year he released Savage Mode, a joint EP with Atlanta-based record producer Metro Boomin that served as his national and international breakthrough, peaking at number 23 on the Billboard 200 and launching the hit singles "X" and "No Heart". Signed to Epic Records in January 2017, Savage released his debut album, Issa Album, later that year, launching the lead single "Bank Account", which peaked at number 12 on the Billboard Hot 100. In September 2017, he charted his first number one single when he featured on Post Malone's "Rockstar", which broke several records and was nominated in two categories at the 61st Grammy Awards. The following month he released Without Warning, a joint album with Metro Boomin and Offest that debuted at number four on the US Billboard 200. 21 Savage's second studio album, I Am > I Was, debuted at number one on the Billboard 200 and stayed at number one for two consecutive weeks. It features guest appearances from Travis Scott, Post Malone, Childish Gambino, Offset, J. Cole, Gunna, Lil Baby, Project Pat, and Schoolboy Q.