This fall, the twisted rock band 'Black Veil Brides' are bringing their new tour to the Fillmore Auditorium on October 27th! Known for their dark makeup, studded clothing and motley Crue like stage performance they are storming the US rock scene with new material. The new album is due for release this October and the tour will support its release, following the bands previous album Wretched and Divine: The Story of the Wild Ones. After touring all over the world the band have secured a place as one of the best upcoming rock bands around. Head down to the Fillmore this October, tickets up now! 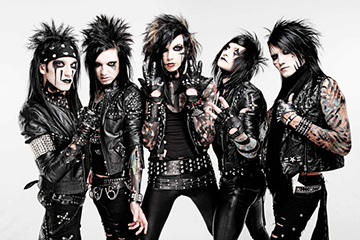 The Black veil Brides arrived on the scene in 2009 with their first independent LP 'We Stitch Wounds' This got to #1 on the Billboard independent album charts. The band then went on to support the Murderdolls in their 2011 tour God Save The Scream Tour. The tour highlighted the bands talent and they won two awards: Revolver Golden God Award for best new Artist and Kerrang! Magazine award for best newcomers. in 2012 they released their most successful album to date Wretched and Divine: The Story of The Wild Ones, which marked the bands greatest commercial success.