Donald Glover AKA Childish Gambino. The Quadruple threat, actor, writer, comedian and hip hop recording artist. There's not much he can't do and conquer. Childish Gambino The Deep Web Tour comes to Fillmore Auditorium on Tuesday 29th April! Make sure not to miss this one! 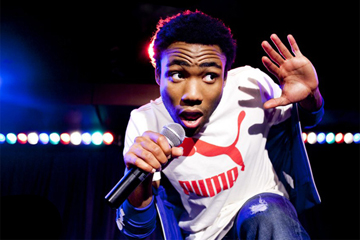 Donald Glover was born in California and came up with the stage name Childish Gambino after using a Wu Tang Clan Rap Name Creator. After releasing his first album 'Camp' he comes back with an almighty second album 'Because The Internet', which got to the top of the Billboard Rap Albums and No. 7 on the Billboard 200 Charts with the single '3005'.

The Deep Web Tour is planned to have 30 destinations including England, France and The Netherlands.
Childish Gambino first came into the spotlight as writer for hit TV show 30 Rock, but he's best known for his role in the TV show Community as Troy Barnes. After his success on TV shows he moved on to do Comedy Central Specials, his own TV film Donald Glover Weirdo which is a recording of his live stand up in New York.

Whether he's acting, doing stand up or rapping he never ceases to amaze and bring an unmissable experience. Be Sure to mark this one on your calender!