Brace yourselves for a metalheads’ paradise…Dethlok is coming out straight from the boob tube to the live concert touring arena.  Dethlok’s live touring band has gone on the road, and is making a stop over in Denver, Colorado.  They’ll definitely be larger than life as this virtual animated band will come alive with flesh and bones, to rock the Fillmore Auditorium on the 20th of November 2012.  Show starts 6:30 pm. 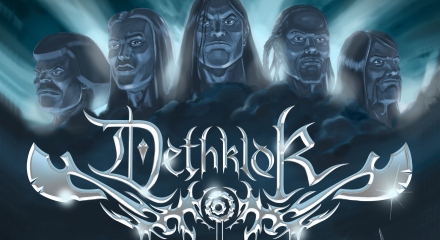 Adult Swim’s program “Metalocalypse” has spawned a new breed of rockstars.  Dethlok is a virtual band, a major feature act of the said animated TV show.  Their misadventures and notoriety as death metal stars have amassed legions of followers.  Just like any other rock act, they have released a number of albums.  They debuted in 2007 with the album called The Dethalbum. The album debuted at number 21 on Billboard Magazine’s Top 200 list. The band released Dethalbum II on September 29, 2009.  Of course, a rockstar’s world wouldn’t be complete without gigs and tours.  Hence, the Dethlok live band was formed by its creator Brendon Small, along with a pack with session musicians.  Dethlok’s third album is due for an October 2012 release. Sharing the stage with Dethlok on this tour are  Machine Head, All That Remains and the Black Dahlia Murder.

If your heart is made of metal, then you’d jump head first just to get hold of tickets to this concert.  Many others are like you and could have already jumped-in, as we speak.  Tickets are still on sale.  Get it fast, get it now!