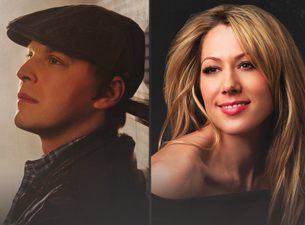 Years before “I Don’t Want to Be” propelled him to pop/rock success, songwriter Gavin DeGraw began honing his piano skills at the age of eight, followed by his participation in several cover bands with his older brother in upstate New York. After a brief stint at the prestigious Berklee School of Music — where he rubbed shoulders with future singer/songwriter contemporary John Mayer — DeGraw decided to take his original songs to New York City.

He arrived during the late ’90s and steadily expanded his audience with a series of buzzworthy shows, one of which was captured on the concert recording Gavin Live. The steady buzz led to offers from major labels, and DeGraw eventually signed a record deal with Clive Davis and his J Records imprint (home of Santana, as well as R&B mainstays Alicia Keys and Angie Stone). His debut album, Chariot, took the world by storm.

Joining him on this special tour is newcomer Colbie Caillat. By age 21, vocalist Colbie Caillat had evolved swiftly from an aspiring R&B/folk singer to a pop sensation, a feat that owed as much to the marketing assistance of MySpace as the meteoric popularity of her debut single, “Bubbly.”

Tickets are still available through LiveNation, but are going fast!