Grace Potter and the Nocturnals Tickets

Get the ultimate country rock-jam music experience from Grace Potter and the Nocturnals.  This band has tirelessly toured the nation, bringing cheers and good will to country rockers in every city they perform in.  Denver, Colorado is part of their itenerary.  Make sure to catch them on the 26th of October 2012, Friday, 7:00pm at the Fillmore Auditorium. 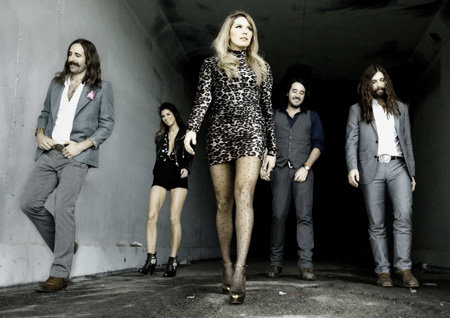 She walks in grace…yet her powerful voice could grip you and blow you away.  Grace Potter, lead vocalist, multi-instrumentalist and founding member is touted as the focal point, the heart and soul of the band.  She has often been compared to Janis Joplin or Koko Taylor.  Formed in 2002, Grace Potter and the Nocturnals are your typical indie band in DIY (do-it-yourself) mode, who managed to tour extensively and were regular performers at various jam bands and music festivals.  In 2005, they were signed under Hollywood Records.  Commercial and mainstream success for them came in the form of various song features on movie and television soundtracks.  Their songs were featured on primetime and daytime soaps like All My Children, Kyle XY, One Tree Hill, Brothers & Sisters,  ER and Grey’s Anatomy .  They contributed songs in movies like Tim Burton’s “Alice and Wonderland” and Disney’s “Tangled”.

Such awesome energy, talent, and power — Grace Potter and the Nocturnals will not short-change you of a riveting, music jam-packed night! Make sure you got your spot secured. Buy your tickets now!