Thrash metal gods Megadeth celebrate the 25th anniversary of their mighty sixth studio labum, Youthanasia, and they'll be bringing the party to Fillmore Auditorium on Thursday 31st October 2019 for a special Halloween show! The legendary band will be performing Youthanasia in its entirety, as well as a few surprises, at this very special, one-of-a-kind show! 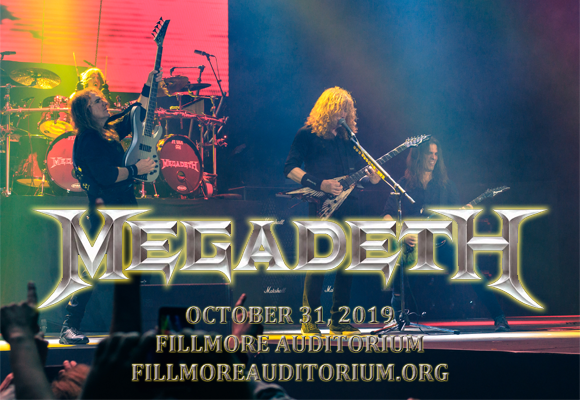 One of the "big four" of American thrash metal, alongside Metallica, Anthrax, and Slayer, Megadeth was formed in Los Angeles, California in 1983 by guitarist Dave Mustaine and bassist David Ellefson. The band came together shortly after Mustaine departed Metallica, and two years later released its debut album, Killing Is My Business… and Business Is Good!. In 1986, the Megadeth released its second studio album, Peace Sells… but Who's Buying?, the first of five platinum albums for the band, including 1992's triple-platinum-selling album Countdown to Extinction. The band has sold over 38 million records worldwide, and has received twelve Grammy Award nominations, winning its first Grammy Award in 2017 for the song "Dystopia" in the Best Metal Performance category. Megadeth's sixteenth studio album is due for release in 2019.