Parade Of Lasers- A Breathtaking Visual Experience
Presenting for your listening pleasure, Joyryde, Doctor P, Bonnie x Clyde & Holly coming to Fillmore Auditorium on Saturday 21st December 2019! Don’t miss this years Parade Of Lasers, promising to be even bigger, even bouncier, even LOUDER! Than ever before! Get your tickets from fillmoreauditorium.org to be sure you don’t miss out! 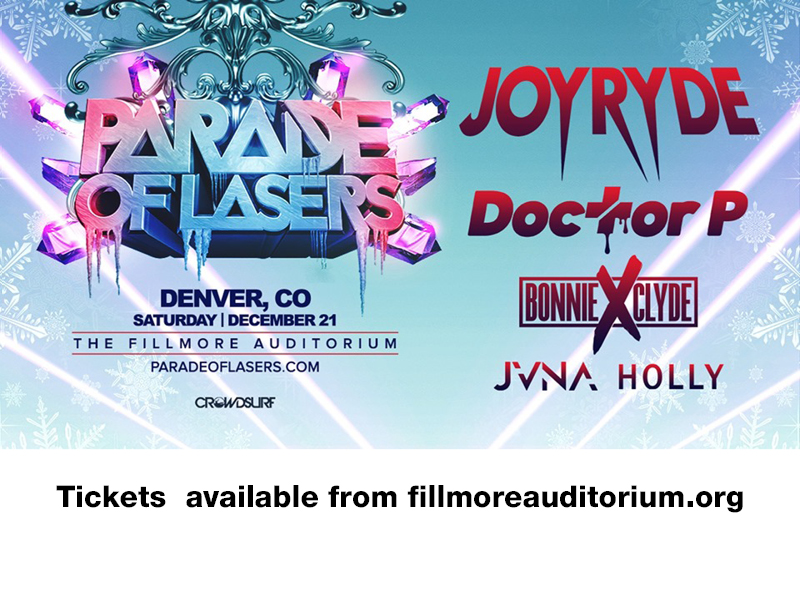 Joyryde
Bass heavy House music producer John Ford, better known by his stage name JOYRYDE, is an English DJ and producer, son of John Ford also known as John Phantasm and owner of Phantasm Records. Joyryde has been producing his own music in the studio from the age of 9 but did not begin DJing worldwide until he was 13. Wrapped up in the life of DJing, Ford did not return to the studio until he was 15, which was when he 'wanted to get back into the producing part of it since the music was getting more technical'.

Doctor P
Doctor P is the stage name of the English dubstep producer and DJ, Shaun Brockhurst. Shaun has also produced drum and bass under the aliases Sounds Destructive, Slum Dogz and DJ Picto. Some of his songs, including "Sweet Shop", "Tetris", "Big Boss", "Watch Out" and the remixes of Example's "Last Ones Standing" and Plan B's "Love Goes Down" have all received more than 5 million views on YouTube.

Bonnie X Clyde
Bonnie X Clyde is an American electronic dance duo formed in 2015 by Daniel Litman and Paige Lopynski. The duo originates from Fairfax, Virginia but started BXC in Miami, Florida and are now based in Los Angeles, California. The group fuses electropop, synthpop, house and trap music in their sound. After releasing their song "Rise Above" they followed it up with their song "Bass Jam" which went #1 on Sirius XM.