Expect the unexpected, Primus is coming to town! Rock citizens of Denver, Colorado are in for a rare trippy performance, a-first-ever 3D enhanced tour courtesy of Primus.  Get ready, you’ll be wearing 3D glasses while head banging with Primus on the 3rd of November 2012, 7:00 pm at the Fillmore Auditorium. 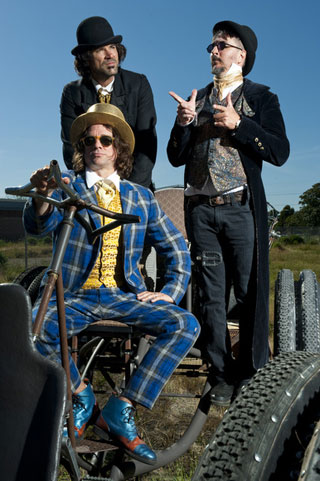 Tupac has done it in Coachella.  Now Primus will do it everywhere! Yes, it’s the first ever 3D-enhanced concert tour.  According to Billboard, a quadrophonic soundsystem, 3D backdrop screens will be mounted for this 2-set concert series; a “really trippy” experience for the fans. 3D goggles will be issued to everyone in the audience.  Frontman Les Claypool  says they will “actually turn around during improv sections (of the songs) and sort of jam along with our visualist and images that are being created especially for this tour….every show will be different. Different environments, as far as venues, are going to lend themselves to different experiences, depending on where you are and whatnot in the crowd. It’s very heady. People that are going to be moshing around probably won’t get any of this, but the heads will get it.”

Primus was formed in San Franciso, California in the year 1984.  Their brand of rock is hard to put on a leash.  MTV suggests that Primus is “a post-punk Rush spiked with the sensibility and humor of Frank Zappa”.  Thrash punk rock, experimental rock, alternative metal…are just among the many and not-quite-at-it ways to describe their music.

First ever 3D concert?! Fans are now in a state of frenzy to get tickets. Don’t be left behind, you’d be missing out a lot. Buy your tickets now!