Quirky piano queen Regina Spektor comes to Fillmore Auditorium on Wednesday 29th March 2017 in support of her highly anticipated upcoming seventh album Remember Us to Life! The singer, songwriter and multi-instrumentalist will be embarking on a countrywide tour, bringing her inventive and intelligent songs to the stage for your enjoyment! Make sure you grab your tickets soon – they're going to sell fast! 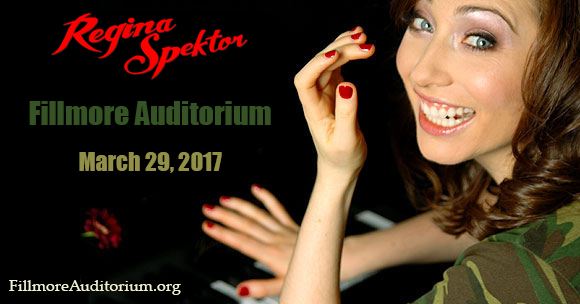 Russian-American singer-songwriter and pianist Regina Spektor musical career began in the early 2000s, when she began to gain recognition as part of New York's anti-folk scene, but Spektor was a classically trained pianist from childhood. She self-released her first two records, 11:11 (2001) and Songs (2002), and was signed to Warner Brothers' record label Sire Records in 2004 to release and distribute her third album Soviet Kitsch, which she originally self-released in 2003. This signing led to mainstream recognition for Spektor, and her fourth album, Begin to Hope, went on to achieve Gold certification. Spektor's following two albums, Far and What We Saw from the Cheap Seats, each debuted at number 3 on the Billboard 200.