Robert Plant, along with his band Sensational Space Shifters is in the midst of the tour everyone's talking about, which comes in support of his new album ‘lullaby and…The Ceaseless Roar’. Get on board this awesome rock escapade at the Fillmore Auditorium on Saturday 4th October 2014. Book your tickets now. 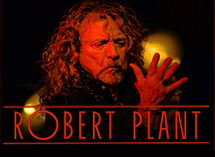 Led Zeppelin's ex-frontman needs no elaborate introduction. His voice alone is a true testament of his long staying power and domination over the rock musicsape. His powerful vocal range continues to resonate in the annals of music history and in the hearts of generations of music enthusiasts. He is 'rock god' personified. He has amassed praise and accolades being one of the of the most celebrated voices in rock, from magazines such as Rolling Stones, Hit Parader, Planet Rock, and many more.

With his legendary stature, Plant has continually sought new adventures in his career and continues to break boundaries. With his new band, the Sensational Space Shifters, he found a rejuvenated passion to (be) “able to express my feelings through melody, power and trance; together in a kaleidoscope of sound, color, and friendship,” says Plant.

And the fans and media seem to be with him on his new journey.

“The singer fronted his fifth band in the last decade. In some ways, it ranked as his most fearless. Never has the singer brought a fresher/stranger/more abstract touch to songs this well-known.” — New York Times

Robert Plant rocked us to high heavens with Led Zepellin. He's at the top of his game once again to conquer new heights with this tour. With an artist of this calibre, not watching this show would be one of your biggest regrets. Don't miss this for the world, get your tickets now!