Get ready to witness one of the freshest and fiercest upcoming electro funk acts in the world! That’s right, it’s the 3-piece SunSquabi, live with support from special guests Russ Liquid, Flamingosis, Defunk, and Escort at the Fillmore Auditorium on Saturday 11th November 2017!! With a line-up like this, the show promises to be an experience like no other – don’t miss out!! Tickets are selling fast, so hit the “Buy Tickets,” button above to grab yours before they go!! 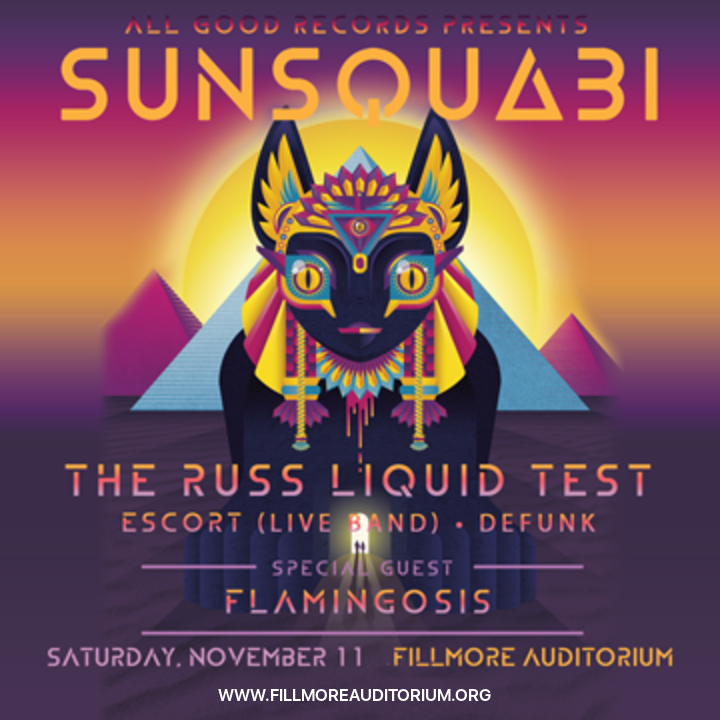 Since they first appeared on the scene only last year, SunSquabi have been making waves on the electro funk scene with their breakout EP “Odyssey,” featuring GRiZ and Dominic Lalli of Big Gigantic. In response to the huge demand brought on by the EP’s release, SunSquabi toured worldwide, playing major festivals including Electric Forest, Camp Bisco, Hulaween and Summer Meltdown! Due to the the “fluid” nature of their music, SunSquabi define their particular brand of electro funk as an Electronic Hydro Funk Experience.

Let’s not forget the support acts! As if SunSquabi wasn’t enough, Russ Liquid, Flamingosis, Defunk and Escort will set you up with smooth jams and funky beats to get you in the mood for the headline act.

Fans of electro funk can’t miss out on the opportunity to see one of the biggest new names in the genre before they conquer the world – get your tickets to see SunSquabi NOW!