Ben Rector comes to Fillmore Auditorium on Friday 19th April 2019 on Magic: The Tour Part II! The Nashville-based singer songwriter will be performing tracks from his sensational 2018 album Magic, as well as a range of other hits like "Drive", "Old Friends" and "Brand New"! Rector's knack for writing dreamy, nostalgic folk-pop tunes is matched by his captivating live performances, and this promises to be an unmissable show! 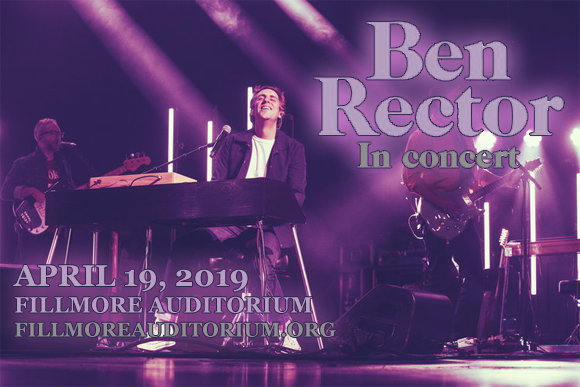 Nashville-based American singer, songwriter and musician Ben Rector's career began while he was studying at the University of Arkansas. Rector released a self-titled EP that featured the song "Conversation", which went on to win the Grand Prize in the Pop category of the John Lennon Songwriting Contest in 2006, making him the youngest artist to ever do so. In 2007, he released his debut album, Twenty Tomorrow, on his own label: Aptly Named Recordings. His third studio album, Into the Morning (2010), reached No. 11 on Billboard's Top Heatseekers chart, bringing his music to a wider audience. To date, Rector has released seven studio albums, which have charted on various Billboard Album Charts, from the Core Genre Rock chart to the Top Folk Albums chart; demonstrating his popularity across a variety of musical genres. His most recent release is 2018's Magic.