Bring Me The Horizon Tickets

Massive news, Bring Me The Horizon fans!! The world’s favorite metalcore band have announced the release date of their upcoming album “amo,” to be January 2019, with an enormous world tour to accompany it!! Don’t miss out – get your tickets to see Bring Me The Horizon LIVE at the Fillmore Auditorium on Monday 11th February 2019!! 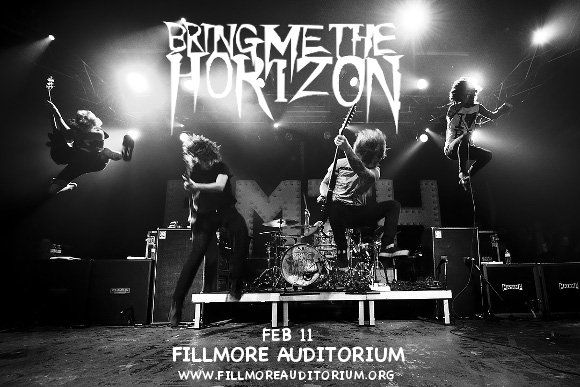 Currently consisting of vocalist Oliver Sykes, guitarist Lee Malia, bassist Matt Kean, drummer Matt Nicholls and keyboardist Jordan Fish, Bring Me The Horizon have been around since 2004 and are a firmly established force at the forefront of the alternative rock and metal scene, with a sound that developed from a deathcore style in their early days to one more metalcore-influenced as time went on. With there album “There Is a Hell, Believe Me, I've Seen It. There Is a Heaven, Let's Keep It a Secret,” the band shot to global prominence.

Following the divorce of lead singer Oli Sykes, the band put the emotional weight of Syke’s experiences to good use in the cathartic “amo,” described by Sykes as “a love album that explores every aspect of that most powerful emotion. It deals with the good the bad and the ugly, and as a result we’ve created an album that’s more experimental, more varied, weird, and wonderful than anything we’ve done before.”

We can hardly wait to hear it live – can you?? Tickets for this show won’t last – grab ‘em now and get ready for Bring Me The Horizon on February 11th!!