In just four years, Houston rapper Don Toliver has gone from an underground SoundCloud artist to one of rap's most promising new stars. Now, the up-and-comer is headed to Fillmore Auditorium on Sunday 24th October 2021 to perform tracks from his hot new album L.O.A.D. aka Life of a Don! Don by name and don by nature, Toliver is a sick lyricist with kudos from some of hip-hop's biggest names – don't sleep on him! He'll be joined by support act Bia! 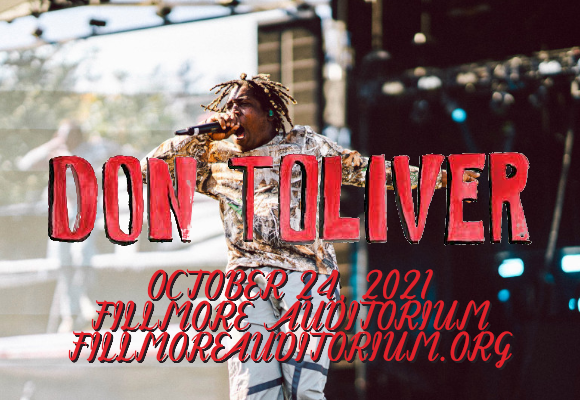 When he released his first mixtape on SoundCloud in 2017 – the collaborative Playa Familia with Yungjosh93 – Houston-based rapper, singer, and songwriter was brand new to the music scene with no previous experience. His talent shone through and by the following year, he’d secured a deal with Atlantic, releasing his major label debut mixtape, Donny Womack that August. He spent the next few years building connections and hooking up for releases with several well-known artists, including Travis Scott, Wiz Khalifa, Quavo and Offset from Migos, and Eminem. Heaven or Hell, his debut album, dropped in 2020 on Travis Scott’s imprint label Cactus Jack. It was a huge hit for the newcomer, reaching number five on Billboard’s Top R&B/Hip-Hop Albums chart and number seven on the Billboard 200. He followed with more features, including on Internet Money’s track "Lemonade," alongside Gunna and Nav, which reached number six on the Billboard Hot 100 – his highest-charting single yet.