In This Moment Tickets

Metalheads listen up!! In This Moment are hitting the road once again in 2018 with the “Witching Hour” tour!! Known for their elaborate live performances, featuring incredible costumes, choreographed routines and pyrotechnics, you’re in for a thrilling metal concert at the Fillmore Auditorium on Wednesday 18th April 2018!!! Tickets on sale now and selling fast!! Grab yours NOW to be sure of your place at the show!! 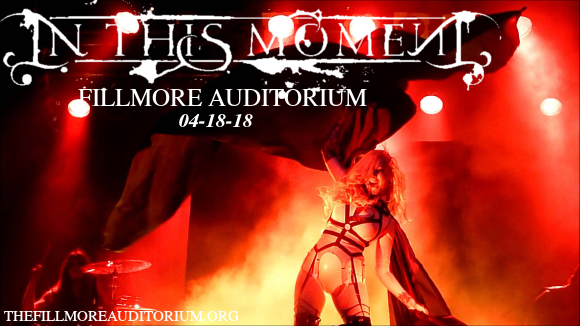 Since 2007, In This Moment have been shaking the metal world with their fresh, constantly-evolving sound. The ferocious female-fronted unit are continuing their tour from last year with their recent release “Ritual,” their first album with new drummer Kent Diimel. The lead single from the album, “Oh Lord,” was hugely successful, hitting the top ten of the Billboard Top Mainstream Rock Charts. Dialling back on the sexuality of their album prior, “Black Widow,” “Ritual,” was inspired by Maria Brink’s journey to Salem with the women in her family, and explores both historical and religious themes.

“We were honoring each other,” she explained, regarding the relation to the concepts behind the album “I was seeking inspiration and experience to inspire me in this album. I was trying to find a lot of truth in myself… I loved Salem. I was blown away by how visually beautiful it is. The history of the witch burnings is fascinating. It was a special ceremonial journey.”

Get ready to fall under In This Moment’s dark spell – buy your tickets quick, before they go!!