Florida-based rapper and singer Rod Wave comes to Fillmore Auditorium on Thursday 14th October 2021 as part of his SoulFly Tour, promoting his chart-topping 2021 album of the same name! The tour is from the same minds behind Rolling Loud Festival and fans can expect a similar level of fun and attention to detail from this show:

"Each tour we take on is given the same attention as a Rolling Loud Festival," Rolling Loud's Matt Zingler explains.

Fans can also expect to hear all their favorite tracks from the 22-year-old's chart-topping album, including his biggest hit, "Tombstone"! 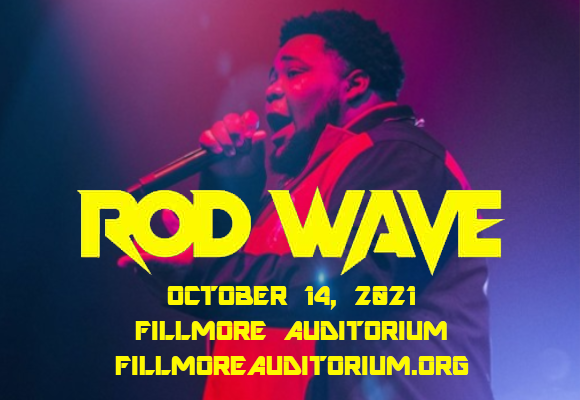 Recognized for his unique talent when he was only a teen, rapper, singer, and songwriter Rod Wave has quickly come of age from R&B/Hip-Hop up-and-comer to Billboard chart-topper in just a few years. His powerful, versatile voice made him a viral hit on YouTube and Tik Tok with the 2019 single "Heart on Ice" (from his mixtape PTSD), which went on to peak at number 25 on the Billboard Hot 100. His debut album Ghetto Gospel, released that winter, peaked at number 10 on the Billboard 200 and was certified gold by the RIAA. Pray for Love, his follow-up album, reached number 2 on the chart and launched several hits, with 12 of the album’s track reaching the Billboard Hot 100, including "Rags2Riches", which peaked at number 12. Wave’s third and most recent album, Soulfly debuted at number one on the US Billboard 200 in March 2021 and has produced two top-20 singles on the Billboard Hot 100, including "Tombstone", which reached number 11 – his highest-charting single to date.