Hard-hitting hip-hop homeboys Run The Jewels are heading to Fillmore Auditorium on Saturday 11th February 2017 as part of their headlining Run The World tour!!! The mighty rap duo are gearing up for the release of their hotly anticipated upcoming album, Run the Jewels 3! Joining them on their countrywide stint will be Gaslamp Killer, MC Spark Master Tape and CUZ! 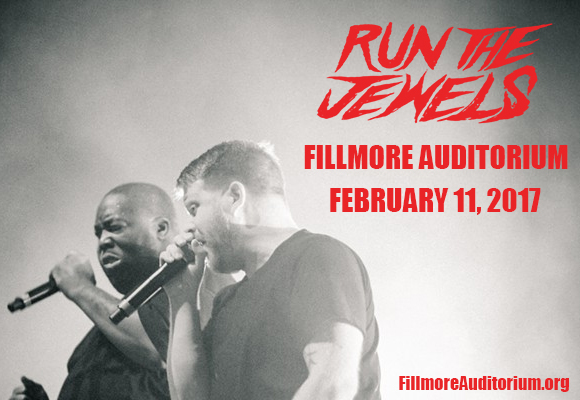 "Killer Mike and El-P are both hip-hop veterans, coming up as part of the Dungeon Family and Company Flow, respectively. Both achieved some success individually, but together as Run The Jewels, they’ve become an unlikely phenomenon in middle age without having lost a step."

"Producer and rapper El-P is virtually the living embodiment of alternative hip-hop, a founder of both the revered "independent as fuck" trio Company Flow and the Definitive Jux label. Killer Mike comes from a more conventional hip-hop background. He was once signed to a major label, and made his debut on Outkast's multiple-platinum Stankonia. The twain seldom meet, but their first collaboration, Killer Mike's El-P-produced R.A.P. Music, was one of 2012's most acclaimed hip-hop albums – some compared its fusion of ferocious, pounding sonics and politically charged lyrics to Ice Cube's Amerikkka's Most Wanted…"