Hip hop powerhouse The Roots comes to Fillmore Auditorium on Saturday 23rd February 2019 for a night of eclectic, jazzy, conscious hip hop that will raise the roof! The Grammy Award-winning collective will be performing hot new material from their highly anticipated upcoming album, set to drop this year! Get your groove on to Jimmy Fallon's notorious house band as the hip hop legends bring you something funky fresh! 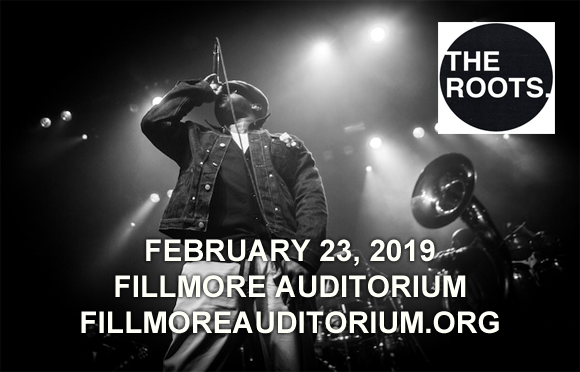 Formed by Tariq "Black Thought" Trotter and Ahmir "Questlove" Thompson in 1987, The Roots are an American hip hop band from Philadelphia, Pennsylvania. Gaining the attention of DGC/Geffen with their self-released 1993 debut album Organix, the group signed to the label, releasing their major-label debut, Do You Want More?!!!??!, in 1994. Their big break came in 1999 with the release of Things Fall Apart, which launched the single “You Got Me”, co-written by Jill Scott and featuring Eve and Erykah Badu. The track earned The Roots and Badu a Grammy Award for Best Rap Performance by a Duo or Group in 2000. In 2009, the group became Jimmy Fallon's house band on Late Night with Jimmy Fallon (2009–2014) and they currently perform as the house band on NBC's The Tonight Show Starring Jimmy Fallon. In 2010, the group earned two more for Wake Up!, their 2010 collaboration album with John Legend. The band has released 10 studio albums, two EPs and two collaboration albums (with other artists) to date.