One of hip hop's most acclaimed bands, The Roots, are headed to Fillmore Auditorium on Friday 20th July 2018! The multi-platinum-selling, Grammy Award-winning alternative hip hop innovators will be performing songs from their varied and illustrious career, including tracks like their smash-hit duet with Erykah Badu, "You Got Me"! Tickets available now! 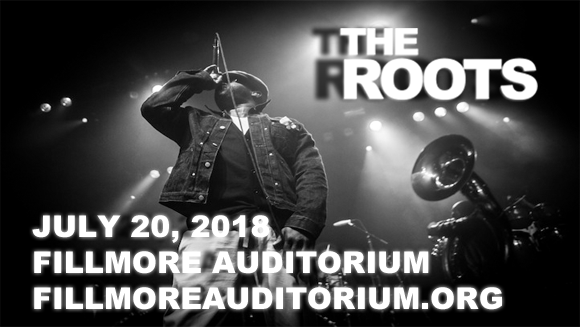 Formed in 1987 by Tariq "Black Thought" Trotter and Ahmir "Questlove" Thompson, The Roots are an American hip hop band from Philadelphia, Pennsylvania. The band's 1993 self-released debut album Organix drew the attention of DGC/Geffen, with whom the band released their major label debut Do You Want More?!!!??! in 1994. However, it was 1999's Things Fall Apart that brought the band mainstream attention, launching the single “You Got Me”, co-written by Jill Scott and featuring Eve and Erykah Badu, which earned The Roots and Badu a Grammy Award for Best Rap Performance by a Duo or Group in 2000. The band also earned two Grammy Awards for Wake Up!, their 2010 collaboration album with John Legend. To date, the band has released 10 studio albums, two EPs, two collaboration albums (with other artists), as well as many other collaborations. They have served as Jimmy Fallon's house band since 2009.